English Gaeilge
Fógra | Notice
Déanfaidh siopa.ie gach iarracht orduithe a phróiseáil chomh luath agus is féidir. Tá baol ann, áfach, go mbeidh moill ann de dheasca an choróinvíris agus na srianta atá i bhfeidhm timpeall an domhain. Gabhaimid leithscéal as aon mhíchaoithiúlacht. Siopa.ie will make every effort to process orders as quickly as possible. However, there is a risk that an order may be delayed due to the coronavirus and the restrictions in place around the world. We apologise for any inconvenience.
Close
RRP: €75.00
€40.00
Discount: 47% 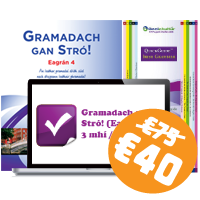