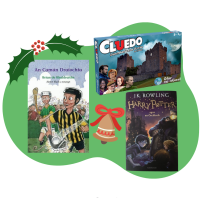 Learning Irish just got a whole lot more exciting with this newly designed bosca bronntanas designed for 12–18-year-olds, combining Irish editions of some of our favourite books and games.

Take a look at what you’ll find in your bosca bronntanas for teens:

1. Cluedo as Gaeilge
Christmas isn’t complete with a board game to enjoy with your family and friends. And this year things are getting even more mysterious with Glór na Gael’s Irish version of Cluedo, Murder in the Hotel.

Úna Bean Uí Dhuinn is dead, betrayed in her own hotel, but who committed the crime, where did she die and how was she killed?

There are six suspects, six chambers and six small weapons. On your journey around the rooms gather information from the other players and try to use the information carefully to find the culprit.

2. Harry Potter agus an Órchloch
This Irish language edition of Harry Potter and the Philosopher’s Stone from J. K. Rowling’s world-famous series is every bit as magical as the English original. The story follows Harry as he navigates his way through his first year at Hogwarts School of Witchcraft and Wizardy, battling a troll, a three-headed dog, and a very suspicious professor in his quest to protect the wizarding world from the much-feared return of the evil Lord Voldemort.

3. An Camán Draíochta
For the first time ever Scoil Dhara have reached the finals of the School Hurling Championship. A few days before the big match Cian finds a hurley in the fairy fort. This novel draws on two fascinating aspects of Irish culture, hurling and Irish folklore, and will be eagerly consumed by any teen with an interest in either.