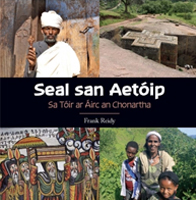 God gave the 10 commandments to Moses on top of Mount Sinai and the Israelites made a golden vessel in order to protect the stone tablets on which God’s word had been written. This Arc of Covenant was brought to Jerusalem where it remained in Solomon’s Temple for a long time. But where did it go? There was no trace of is when the Babylonians destroyed the temple in the 6th century BC. Nor was it mentioned when the Romans destroyed the second temple in 70 AD. But there were rumours that the Arc travelled to Ethiopia…

In this book Frank Reidy follows the journey the Arc made to Ethiopia. He examines the history and mythology of the of the Arc and he comes to a new understanding of the Arc and its important status in Ethiopia. A new understanding is provided here of a country normally only associated with hunger, suffering and death. Beyond that again we see laughter and joy, age and nobility, belief and friendship: travel, navigation and commentary portraying food for thought and nourishment for the soul.